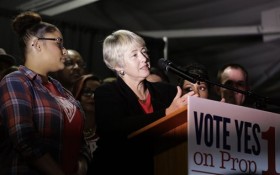 The landslide defeat of a bathroom-rights bill in Houston has “shell shocked” transgender-rights activists according to Houston attorney John LaRue, who ran for the Houston City Council and led a campaign to support the Houston Equal Rights Ordinance (HERO).

According to LaRue, the angry HERO activists have started planning to punish Houston voters in retaliation.

“The Super Bowl is slated to come in 2017, and there are rumblings of plans to ask the NFL to move and go elsewhere in support of LGBT people and other groups HERO would have protected,” LaRue said.

By a 61-to-39-percent margin, voters in America’s fourth largest city on Tuesday rejected the wide-reaching ordinance. Aside from giving individuals the right to use whichever bathroom they choose, based on the gender they identify with, the ordinance would have extended legal protections in employment, housing and public spaces on the basis of race, sexual orientation, gender identity and other categories.

Opponents prevailed with a campaign that dubbed the measure “the bathroom ordinance” and raised the specter of male sexual predators invading women’s restrooms.

“This is a national game-changer,” said Jonathan Saenz of Texas Values Action, which opposed the ordinance. He described the result as “a massive victory for common sense, safety, and religious freedom.”

Ordinance supporters, including the Greater Houston Partnership, an influential business group, are now warning that the defeat of the measure might trigger economic boycotts or endanger plans for Houston to host the Super Bowl in 2017 or the NCAA Final Four in 2016.

A proposed federal nondiscrimination law is given no chance of passage any time soon because of Republican opposition, so activists are waging local and state-level campaigns. Frequently, the most visceral issue that arises is transgender people’s access to public restrooms, and in some cases public schools have become the battleground.