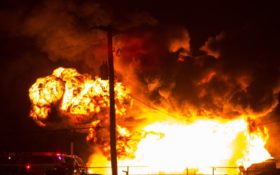 A double tanker vehicle hauling gasoline exploded on Interstate 15 temporarily shutting down traffic in both directions in Salt Lake City on Thursday.

KUTV reports that no one was injured. The truck driver told police he believes his brakes caught fire, which led to the blaze.

The Utah Air National Guard brought in a specialized, massive fire truck able to extinguish jetliners on fire and drove right into the flames to spray it down.