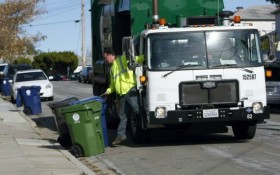 A Seattle elementary school is thanking a garbageman for finding nearly $12,000 in checks in the trash.

KOMO-TV in Seattle reports that Waste Management employee Micah Speir was picking up scattered trash next to some bins when he found a number of checks made out to Lawson Elementary School.

Principal Dorian Manza says he met Speir on his route and gratefully took the checks back. The funds were from a fundraising drive and a Parent-Teacher Association member had accidentally dropped the bag along the garbage truck’s route. When Manza tried to tip Speir for his good deed, the man turned him down.

Speir says his only concern was doing the right thing and returning the money to the school.