Gangster killed in shootout with Chicago police - The Horn News 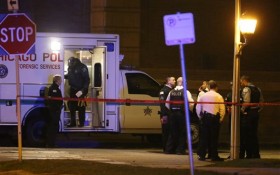 A man fatally wounded during a shootout with Chicago police was identified Tuesday as a gang member and convicted felon with more than 40 arrests.

Officers at the scene with first aid kits and bandages were able to apply preliminary care to Harris while they waited for Chicago Fire Department emergency crews, Guglielmi said.

“The officers were trained by CPD in LEMART — Law Enforcement Medical AND Rescue Training — which is designed to render life-saving aid following tactical and emergency situations,” he said in a statement.

The shootout occurred after officers observed a man and a woman acting suspiciously and decided to investigate, Guglielmi said. The pair fled, the officers gave chase and the man opened fire, hitting three of them multiple times. One of the officers returned fire, fatally injuring Harris.

One officer was shot in the back, another in the foot and a third in the chest, authorities said, adding his body armor likely deflected the bullet.

A gun used by the dead suspect was recovered at the scene, authorities said.

In a statement, police officials said Harris has 43 arrests on his record, 11 of them felonies. He was convicted of five felony charges, the latest being aggravated unlawful use of a weapon and resisting a peace officer, causing injury, in January 2012.

The woman was arrested Monday night but has not been charged, Guglielmi said.

Mayor Rahm Emanuel and Interim Police Superintendent John Escalante visited the officers and their families at the hospital. The shooting follows the mortal wounding of an undercover narcotics officer in Maryland who was shot by a colleague as a gunman attacked a police station Sunday night.

Police said in a statement that the city’s Independent Police Review Authorities will investigate the shooting. The officers involved will be put on administrative duties for 30 days.