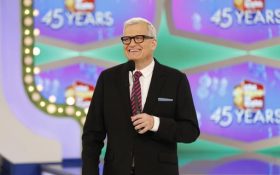 “Price is Right” history was made on Monday’s episode when a trio of contestants spun different combinations of $1 on the game show’s colorful wheel.

The three contestants each landed on spaces adding up to $1 in a pair of spins during one of the show’s showcase showdowns.

The game show famously awards contestants who earn $1 on the wheel without going over a $1,000 prize and a chance to spin again.

“The Price is Right” host Drew Carey pumped his fist in the air after the contestants achieved the first three-way $1 tie with different combinations in the show’s history . In past instances of such a tie, at least one of the contestants landed exactly on the wheel’s coveted $1 space.

The three contestants celebrated in Monday’s episode by jumping up and down while embracing in a group hug.

The long-running CBS game show is airing its 45th season.