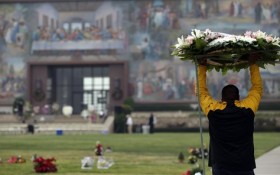 On the morning of Dec. 2, Yvette Velasco got dressed up and flat-ironed her hair. It was an important day: The 27-year-old was going to receive a gold badge officially recognizing her as a San Bernardino County health inspector at a holiday work event.

The world now knows what happened: Syed Farook and his wife, Tashfeen Malik, stormed into the gathering, opening fire on Farook’s colleagues. Velasco and 13 others were killed in what the FBI is investigating as an act of terrorism. 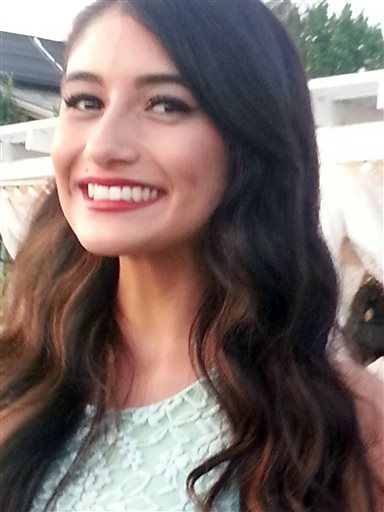 One week and a day after the massacre, Velasco’s friends and family gathered Thursday for an outdoor funeral, at a spot on a hill chosen by her three older sisters and parents in remembrance of her love of nature. Her small dark wooden casket draped with white flowers was placed beneath an overcast sky, as friends and family tearfully recalled Velasco’s bright smile, early wisdom and determination to succeed as an environmental health inspector.

“She was more than our sister,” Velasco’s sister, Erica Porteous, 37, said. “She was our soul mate.”

The ceremony marked the start of a grim procession expected to take place throughout Southern California over the next week: about a dozen memorials, funerals and burials for those killed in the attack.

For the tight-knit Velasco family, the last week has felt like “a living nightmare,” Porteous said.

Velasco was the baby in the family, the one her sisters all remember excitedly bringing home from the hospital and watching grow up. None of them knew she was going to be at the Inland Regional Center that morning. She didn’t like to call attention to herself and only casually mentioned a badge ceremony to her mother, her sisters said.

The only hint they had that she was at a work gathering came from a Snapchat message she sent her sister Adriana Velasco, 38. The message had a photo of her hand wrapped around a Starbucks cup and a few words mentioning a holiday party.

Less than an hour later, the family started hearing reports of a shooting in San Bernardino. Genevieve Tovar, 32, sent her sisters and parents a message telling them to be careful. The shooters were still on the loose.

Porteous turned on the television and realized the building under siege was often used for county meetings. She sent a text message to a friend, asking if she knew which department was gathering there that day.

Velasco had recently passed the exam to become a state registered environmental health specialist. She had spent the last five years working her way up at the San Bernardino County Department of Public Health.

She started off in vector control, collecting mosquitoes hovering near backyard pools and dirty puddles for disease testing, and eventually became an environmental health specialist, a job that sent her around the county inspecting restaurants.

It was a job she was passionate about: Even at home, she would chide her sisters when they left out food for too long. 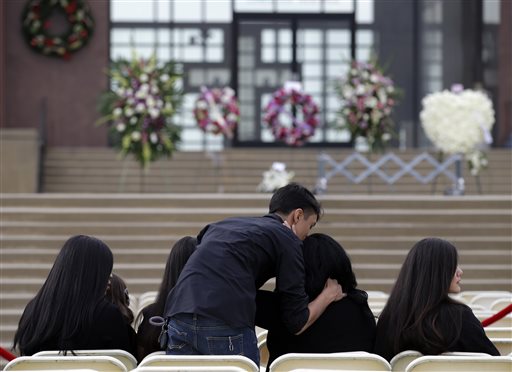 When the family learned it was Velasco’s department meeting at the center, they began to panic. Her father and a brother-in-law went to every hospital receiving shooting victims. Her sisters called every hospital in the region. The next morning, Velasco’s father, a retired California Highway Patrol lieutenant, called his daughters upstairs and told them to pray.

“We ask God to give us the strength to face whatever is in store for us,” he said.

The week that followed has brought days of shock and a list of somber preparations they didn’t imagine making for a little sister: arranging the funeral and picking photos of a smiling Velasco at birthdays and weddings for a reception slideshow.

“Sometimes I don’t even feel like getting up,” Porteous said. “I still can’t fully accept it.”

More details have come to light about who killed Velasco and her co-workers. Farook and Malik had embraced radical Islamic ideology for at least two years, FBI Director James Comey said Wednesday. What exactly motivated them and why they chose to open fire on a work event is under investigation.

Velasco’s sisters feel certain they know what she would want in the aftermath of the attack.

“She would want to promote peace,” Tovar said. 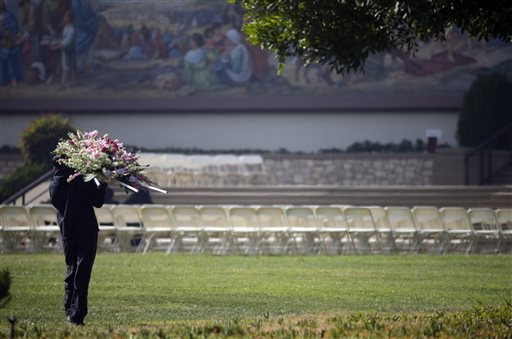 At her funeral Thursday, former colleagues recalled a petite Velasco determinedly driving enormous trucks, setting smelly mosquito traps and lifting heavy bags in spite of her small frame. Her sisters remembered her as the one they went to for advice, even though she was the youngest, because she offered a sound opinion and did not judge. Their father somberly kissed his daughter’s casket and with his wife, tearfully released one white dove into the sky.

After her death, Velasco’s parents and sisters met with the FBI and county officials. They didn’t learn much that they hadn’t already previously been told. But they did get one last piece of their daughter’s life to hold on to: The gold star badge she had been waiting to receive.