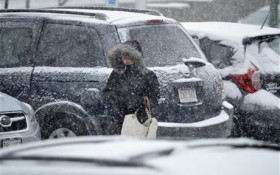 The calendar may say spring, but wintry weather struck the Northeast hard on Monday, delivering a storm that broke records in Boston and at a Rhode Island airport and could end up dropping as much as 10 inches of snow in some places.

Winter weather advisories were issued from the Buffalo area to Albany in New York, where forecasters called for up to 10 inches of snow at higher elevations.

Southern New England got hit by the slow-moving storm, with up to 8 inches of snow forecast for Boston, parts of southeastern Massachusetts and northern Rhode Island.

Southern New Hampshire and Connecticut could get up to 6 inches, with less in coastal areas, forecasters said.

Dozens of school districts, mostly in western Massachusetts, canceled classes for the day. After-school activities and evening classes also were canceled throughout the state and in Rhode Island.

Dennis F. Conte, of Johnston, Rhode Island, decided not to venture out early Monday because he worried about getting into an accident. By late morning, Conte decided it was safe enough to do a few errands.

Outside Dave’s Marketplace in East Greenwich, Rhode Island, Conte said that while snow this time of year is unexpected and makes things difficult it’s simply nature.

“We have to wait it out. The next couple of nights will be cold, but then the weather’s better,” he said. “We just have to grin and bear it.”

The maximum speed along the Massachusetts Turnpike was reduced to 40 mph, and state and local police responded to dozens of fender-benders.

In West Hartford, Connecticut, a woman was cited for an accident with a school bus during the storm that sent the driver to the hospital. Police said one student also received a minor injury but wasn’t hospitalized.

The snow was expected to come down in bands and last into the evening, when temperatures were to plummet, and some streets could freeze over.

Low-temperature records that have stood for more than a century could fall in some spots, the National Weather Service said.

Monday’s storm came a day after several inches of snow fell in some areas and high winds toppled hundreds of trees across New York City. High winds brought down a rotted tree in Abington, about 20 miles south of Boston, on Sunday, killing a married couple in their car.

Although northern New England was not expected to see much snow Monday, the cleanup continued a day after winds that gusted up to 50 mph knocked out power to tens of thousands of customers in Maine.

And although Maine wasn’t getting much snow, it did get cold enough for the Sugarloaf ski resort to make snow, the first time in the resort’s 65-year history that it’s fired up its snow guns in April.

Sunday’s high winds also knocked out power to tens of thousands of customers in New Jersey and Pennsylvania.