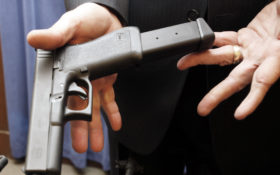 An angry man stormed behind a restaurant counter Friday at 1:00am and viciously attacked his waitress… and only stopped when her quick thinking co-worker drew her concealed carry firearm and saved the day.

Milwaukee police are asking for the public’s help identifying the suspect in the June 29 attack. Authorities say the victim was seriously injured and transported to a nearby hospital.

Surveillance footage from the vicious attack is breathtaking — and proof that armed citizens being well-prepared can save someone’s life.

Video shows the customer come behind the counter and, seemingly without provocation, punch the waitress in the face. As she recoils back, the suspect pursues. He only stops when the victim’s co-worker, another woman, draws her concealed carry firearm and orders him back.

“It is sickening to see this unsuspecting worker assaulted so brutally by this individual,” local Milwaukee Alderman Bob Donovan, chair of the Public Safety and Health Committee, said in a news release. “It was an unprovoked attack and I am asking anyone with information to please contact MPD immediately at 414-935-7360 so we can get him off the street and behind bars where he belongs.”

We were alerted to an incident that took place at our Mitchell Street location on June 29 and are working directly with the injured employee, store manager and franchise owner to review the events. The safety and security of our employees and patrons is our top priority. We are working with our team, and local law enforcement to assess current security measures and determine next steps.

Donovan said the hero had a legal concealed carry permit for the firearm and was successful in getting the suspect to leave the premises.

“One can only imagine what might have occurred if that employee had not pulled out her weapon,” Donovan told local NBC affiliate TMJ4.

“Sadly, I’m told the co-worker quit her job shortly after the incident… and can you really blame her for quitting? This is just sickening and I am tired of this crap happening in my district and in too many other neighborhoods across Milwaukee,” he said.