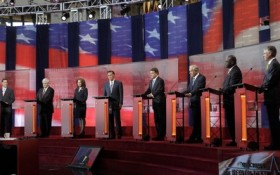 The latest waypoint in the 2016 race for president is Thursday, when the deadline arrives by midnight for candidates to tell federal regulators the details of how much they’ve raised for their campaigns — and how much they’ve spent on them.

Many of the major White House hopefuls have already boasted about their recent fundraising efforts, including the two leading contenders for the Democratic presidential nomination: Hillary Rodham Clinton and Bernie Sanders.

They each raised more than any of the Republicans who have said what they collected from donors between July 1 and Sept. 30.

Among those who have yet to share their totals are former Florida Gov. Jeb Bush and front-runner Donald Trump, the “really rich” real-estate dealmaker whose mild forays into fundraising include selling his trademark “Make America Great Again” hats.

“I thought I’d have spent about $20, $25 million dollars up until this point. You know what I’ve spent? Like nothing,” Trump said on Wednesday, crediting media coverage for negating the need to spend on paid ads.

Here’s a look at what we know so far about the state of presidential campaign finance in the third quarter, and what we expect to learn when the candidates’ official reports are filed with the Federal Election Commission.

CLINTON, SANDERS RAISE ABOUT THE SAME AMOUNT — IN DIFFERENT WAYS

Clinton’s campaign said it raised $28 million in the three month ending Sept. 30. That’s less than what she raised in the early months of her campaign, but more than any previous non-incumbent Democratic presidential primary contestant in the third quarter of the year before Election Day.

Most of the money came in through dozens of traditional fundraising events, where the price of entry was often the legal maximum donation of $2,700.

Sanders brought in about $26 million, but did so largely through small contributions collected online. He continues to show off his fundraising prowess, harvesting about $2 million in new contributions in the hours that followed Tuesday night’s Democratic debate.

“We are doing it the old-fashioned way: 650,000 individual contributions,” Sanders said in his closing statement of that appearance, adding: “We are averaging 30 bucks apiece. We would appreciate your help.”

Lots of Republican voters sent a message this summer in preference polls that they want an outsider as their nominee. That’s reflected in how they’re giving to the candidates, too.

Retired neurosurgeon Ben Carson appears likely to post the best haul of the more than a dozen candidates in the GOP field, with about $20 million. But his campaign also spent heavily, burning through $14 million over the same time period.

Carson spent most of that money raising money, according to figures the campaign provided to The Associated Press. Still, Carson had about $11 million in available cash as of Sept. 30.

Carson’s closest known competitor is Texas Sen. Ted Cruz, whose campaign raised $12.2 million in the third quarter. Although he has been a senator since 2012, he also is running as an outsider, with a focus on the many times he has broken with Senate Republican leadership over issues such as shutting down the government to defund implementation of the Affordable Care Act.

Former technology executive Carly Fiorina, who has never held elected office, raised $6.8 million for her campaign — four times as much as she collected at the start of her campaign. Her boost came after strong debate performances that also led to a rise in some national preference polls.

LOWER FIGURES FOR OTHERS IN GOP

Others in the Republican race found the summer months a tough slog for fundraising. Kentucky Sen. Rand Paul raised $2.5 million and Florida Sen. Marco Rubio about $6 million. Paul recently devoted time to a separate bid to keep his Senate seat, leading some to question if he’s still in the White House race.

“I wouldn’t be doing this dumb-ass livestreaming if I weren’t,” Paul said in a recent Internet video. “So, yes, I still am running for president. So get over it.”

Rubio’s campaign argues that it can make its money go the distance because of its extreme frugality. The campaign told top donors that it began October with $11 million socked away. As evidence of its tight ship, Rubio’s campaign manager Terry Sullivan has said he must personally approve all expenses over $500.

But Rubio is also getting a boost from a nonprofit group that doesn’t disclose its donors. While the campaign hasn’t purchased any television commercials, the group Conservative Solutions Project has already spent millions of dollars on ads.

New Jersey Gov. Chris Christie and Ohio Gov. John Kasich haven’t yet had to disclose any information about their fundraising, because they entered the contest later than the other candidates. That changes on Thursday, when both file their first reports.

Christie and his aides have played down expectations about their total. “We’re doing fine,” Christie recently said during a swing through New Hampshire. “I’m proud of what we did in the third quarter fundraising, which is always a really difficult quarter given the summer and everything else.”

Also yet to say how much he’s raised is Bush, a fundraising leader for the three-month period that ended June 30. He raised $11.4 million in June during his first two weeks as an official candidate, a faster daily fundraising rate than any other candidate.

He and his aides have suggested that they’ve raised more than they did in their first two weeks, but less than Carson’s $20 million. Bush also said he plans to release a list of his top money-raisers on Thursday.

Such disclosure isn’t required by law, but many candidates, including Clinton, have done so in the name of transparency. He hasn’t yet said precisely what information he’ll be sharing.

WHAT WE WON’T LEARN: THE BIGGEST DONORS

Only the official campaigns face a Thursday fundraising reporting deadline. Their super PAC counterparts can wait until January to disclose their newest financial details and donor names.

While contributors can give a maximum of $2,700 per election to campaigns, they face no such restrictions with super PACs. Those groups must be legally separate from the campaigns, but are often stacked with a candidate’s most trusted aides.

As of June 30, super PACs and other outside groups tailored to presidential candidates had raised more than three times as much as the candidates themselves.