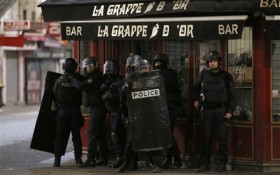 Gunfire and grenades woke the residents of a Paris suburb earlier today, where French police forces raided the apartment building of the suspected mastermind of last week’s terror attacks.

The siege ended with two deaths and seven arrests.

The targeted suspects were “about to move on some kind of operation,” and that the raid was “right on time,” an unnamed police sources reportedly told CNN.

The dead were a woman who blew herself up with an explosive vest and a man hit by projectiles and grenades at the end of the raid, which began before dawn and continued for more than seven hours at the apartment building in the Paris suburb of Saint-Denis.

Paris prosecutor Francois Molins said the raid was launched after information from tapped telephone conversations, surveillance and witness accounts indicated that the suspected attack’s planner, Abdelhamid Abaaoud, might be in a safe house in the district.

Authorities could not immediately confirm whether Abaaoud, a Belgian Islamic State militant, was killed or arrested Wednesday morning.

Abaaoud was believed to be in Syria after a January police raid in Belgium, but bragged in Islamic State propaganda of his ability to move back and forth between Europe and Syria undetected.

Speaking at the scene of Wednesday’s raid, Molins said the operation began with a pre-dawn shootout and resulted in the capture of three people inside the apartment, the death of a woman who set off an explosive charge, and the death of “another terrorist who was found at the end of the operation who was hit by projectiles and grenades.”

He said two other people were detained while trying to hide in the rubble, and two others were arrested, including the man who had provided the apartment and one of his acquaintances. Police at the scene were seen escorting away one man naked from the waist down and another wrapped in a gold emergency blanked.

“As things stand, it is impossible to give you the identities of the people detained, which are being verified,” he said.

Molins and Interior Minister Bernard Cazeneuve did not specify whether any suspects might still be at large.

A police official not authorized to be publicly named because of police rules said four police officers were injured.

French President Francois Hollande held an emergency meeting with senior ministers at the Elysee Palace to monitor the raid.

Residents said an explosion shook the neighborhood shortly after 4 a.m.

“We guessed it was linked to Friday night,” said Yves Steux, barman at L’Escargot restaurant 250 meters (yards) from the assault.”My wife panicked and was scared and told me not to leave, but I ignored her. Life goes on.”

Baptiste Marie, a 26-year-old independent journalist who lives in the neighborhood, said a second large explosion was followed by “two more explosions. There was an hour of gunfire.”

Another witness, Amine Guizani, said he heard the sound of grenades and automatic gunfire.

Sporadic bangs and explosions continued, and at 7:30 a.m. at least seven explosions shook the center of Saint-Denis. Associated Press reporters at the scene could hear what sounded like grenade blasts from the direction of the standoff.

Investigators have identified 27-year-old Abaaoud, a Belgian of Moroccan descent, as the chief architect of Friday’s attacks in Paris, which killed 129 people and injured 350 others.

A U.S. official briefed on intelligence matters said Abaaoud was a key figure in an Islamic State external operations cell that U.S. intelligence agencies have been tracking for many months.

Police vans and fire trucks rushed to the scene north of Paris, less than two kilometers (just over a mile) from the Stade de France stadium. Three suicide bombers blew themselves up Friday near the stadium during an international soccer match with French President Francois Hollande in attendance.

In Saint-Denis on Wednesday, police cordoned off the area nearby, including a pedestrian zone lined with shops and 19th-century apartment buildings. Riot police cleared people from the streets, pointing guns at curious residents to move them off the roads.