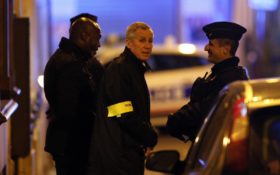 French police on Monday were questioning the parents and a friend of a 20-year-old man who attacked passers-by with a knife in Paris, amid questions about how France’s radical watch list is used.

Khamzat Azimov, a French citizen born in the Russian republic of Chechnya, killed one person and wounded four others in Saturday’s attack, before police fatally shot him. The Islamic State group claimed responsibility.

Azimov’s parents and a friend from the eastern city of Strasbourg were being detained by police. Under French law, people questioned in an investigation relating to alleged terrorism can be taken into custody for up to four days.

A judicial official said Monday the suspect was living in the northern 18th district of Paris with his family, which had previously lived in Strasbourg.

The official wasn’t authorized to speak publicly on the ongoing investigation.

Counterterrorism investigators want to know if the assailant had help or co-conspirators.

French authorities said the suspect was on a police watch list for radicalism, but he had a clean criminal record.

Far-right leader Marine Le Pen asked in a tweet what the list was for if it wasn’t used to stop potential attackers.

French authorities have previously explained that the register, designed as a tool for intelligence services, contains the names of thousands of individuals suspected of being radicalized but who have yet to perform acts of terrorism.

French Interior minister Gerard Collomb will hold a meeting with France’s prefects in charge of defense and security later Monday.

Azimov obtained French nationality in 2010. He was born in the largely Muslim Russian republic of Chechnya, where extremism has long simmered. Chechens have been among the numerous foreign fighters in Syria and Iraq, some joining the Islamic State cause early in the fighting.

French media report the victim killed in the attack was a 29-year-old man identified only by his first name, Ronan, who was living in the 13th district of Paris. One of his neighbors told reporters he was a “very smiling” man, with a “great generosity.”