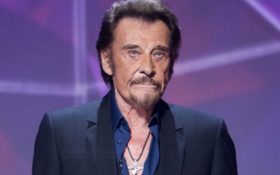 Johnny Hallyday, France’s biggest rock star for more than half a century and an icon who packed sports stadiums and all but lit up the Eiffel Tower with his high-energy concerts at the foot of the Paris landmark, died early Wednesday. He was 74.

President Emmanuel Macron, who knew the star offstage, announced his death in a statement, saying “he brought a part of America into our national pantheon.” In a second comment during a visit to Algeria, Macron said that “we were convinced he was invincible … He is a French hero.”

Macron’s office said the president spoke with Hallyday’s family, but didn’t provide details about where the rocker died.

The French media reported widely that he died at his home west of Paris, which was quickly surrounded by mourning fans and police providing security.

“Hearing about Johnny’s death has hurt us because Johnny is our God and nobody can replace him,” said one fan, Yves Buisson, outside the Hallyday family’s gated home in Marnes-La-Coquette. His arms were covered with tattoos of the star.

Hallyday had lung cancer and repeated health scares in recent years that dominated national news, and recently returned from a hospital stay. But he continued performing as recently as this summer.

Celine Dion was among stars sharing condolences for a rocker with a famously gravelly voice who sold more than 100 million records, filled concert halls and split his time between Los Angeles and Paris. Brigitte Bardot tweeted: “Johnny is a monument. It is France!”

Some of France’s leading political figures on the left and right joined Macron in mourning the loss of “Johnny,” as he was known. Former President Francois Hollande, the Socialist leader replaced by Macron, said Hallyday “is part of our national patrimony.”

Hallyday fashioned his glitzy stage aura, with an open shirt, jewelry and a pumping pelvis, from Elvis Presley, drew musical inspiration from Chuck Berry and Buddy Holly, performed with Jimi Hendrix, and made an album in country music’s capital, Nashville, Tennessee.

His stardom largely ended at the French-speaking world, yet in France itself, he was an institution, with a postage stamp in his honor. He was the country’s top rock ‘n’ roll star through more than five decades and eight presidents, and it was no exaggeration when Macron wrote “the whole country is in mourning.”

“We all have something of Johnny Hallyday in us,” Macron said, praising “a sincerity and authenticity that kept alive the flame that he ignited in the public’s heart.”

Hallyday, whose father was Belgian, also was a musical hero across the French border. The Brussels subway system played his hits over intercoms, and Belgian Prime Minister Charles Michel said “a great artist has left us, transcending generations. ”

The antithesis of a French hero right down to his Elvis-style glitter and un-French name, Hallyday was among the most familiar faces and voices in France, which knew him simply as Johnny, pronounced with a slight French accent and beloved across generations.

He released his last album “Rester Vivant” — or “Staying Alive” — last year, and performed this summer as part of the “Old Crooks” tour with long-time friends and veteran French musicians Eddy Mitchell and Jacques Dutronc.

Former President Nicolas Sarkozy, as mayor of the rich enclave of Neuilly-sur-Seine on the western edge of Paris, presided in 1996 over the entertainer’s marriage to his fourth wife, Laeticia.

“For each of us, he means something personal. Memories, happy moments, songs and music,” Sarkozy said in 2009, days after Hallyday, then 66, was hospitalized in Los Angeles. Sarkozy called the Hallyday family during an EU summit and gave updates on the singer’s condition during news conferences.

The star all but lit up the Eiffel Tower during several free concerts, one on Bastille Day in 2009, attended by more than 500,000 people.

Hallyday sang some songs in English, including “Hot Legs” and “House of the Rising Sun,” — the melody of which was also used for one of his most famous songs, the 1964 “Le Penitencier.”

And there was a real American connection: American singer Lee Ketchman gave him his first electric guitar. Hallyday’s stardom, however, was not inevitable.

He was born in Paris on June 15, 1943, of a Belgian father and French mother during the dark days of World War II with a less glamorous name, Jean-Philippe Smet. His parents had separated by the end of the year. The young Smet followed his father’s sisters to London, where he met Ketchman.

Hallyday gave his first professional concert in 1960, under the name Johnny, and put out his first album a year later. By 1962, he had met the woman who would be his wife for years, and remained his friend to the end, singing star Sylvie Vartan. That year, he also made an album in Nashville, Tennessee, and rubbed shoulders with American singing greats.

He quickly became a favorite of young people during the “Ye-ye” period, the golden years of French pop music. A respected musician, Hallyday played with Jimmy Hendrix during the 1960s and once recorded a song with Led Zeppelin founder Jimmy Page.

With his square-jawed good looks and piercing blue eyes, Hallyday was often sought-out for the cinema, playing in French director Jean-Luc Godard’s “Detective” (1984) and with other illustrious directors including Costa-Gavras.

Hallyday appeared in Johnnie To’s “Vengeance” (2009) and had talked about giving film a bigger role in his life.

However, it was the rocker’s personal life, and his marriage to Laeticia, that gave him a mellow edge. He spoke lovingly of daughters Jade and Joy, who were adopted from Vietnam.

His widow’s statement announcing the death was a testimonial to Hallyday’s battle with cancer, “giving everyone extraordinary life lessons.”

“The heart beat so strongly in this body of a rocker who lived a life without concession for the stage, for his public, for those who adored and loved him,” said her statement, transmitted overnight to the French national news agency AFP. “My man is no more.”

Hallyday is also survived by two other children, Dave, a singer fathered with Vartan, and Laura Smet, whom he had with noted French actress Nathalie Baye.