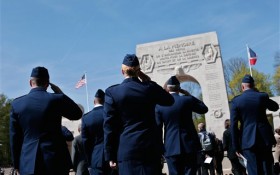 A parade of jets and vintage aircraft roared across the sky outside Paris on Wednesday, honoring the American fighter pilots who flew for France during World War I.

The commemoration marked the centenary of the formation of the Lafayette Escadrille on April 20, 1916, by a group of American airmen who — almost a full year before the U.S. entered the war — decided to join the fight against the Germans.

“We are gathered here today to remind ourselves that, 100 years ago, France and the United States stood together against the enemies of the free world,” French lawmaker Jean-Marc Todeschini told a crowd of airmen and dignitaries gathered at Marnes-la-Coquette , where the group was first formed.

“A century later, the conflicts have changed, and our enemies have a new face, but we still defend the same values — that of justice and democracy,” he said.

The Lafayette Escadrille, also known as the Lafayette Flying Corps, was named after the Marquis de Lafayette, a French aristocrat who arrived in the newly declared United States in 1777 and became a key ally of Gen. George Washington.

Of the nearly 180 pilots who served for France, 68 were killed before the end of the war. Their names are recorded on an arch at Marnes-la-Coquette flanked by French and American flags.