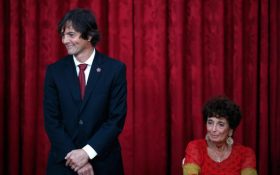 President Francois Hollande has bestowed a Legion of Honor award on a French-American who was among passengers who stopped a gunman on a high-speed train in 2015, and was wounded after grabbing his assault rifle.

Mark Moogalian, 52, was honored on Thursday at the Elysee Palace. He was hospitalized when three Americans and a British man who overpowered Moroccan suspect, Ayoub El-Khazzani, were honored.

Moogalian grabbed an assault rifle from El-Khazzani then was shot with a handgun.

Moogalian, a musician and teacher, has lived in France for more than two decades.