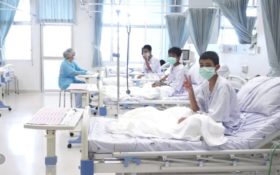 The 12 boys rescued from deep within a flooded cave in northern Thailand made two-finger victory signs from their hospital beds on Wednesday in a moving video from the isolation ward where they’re recuperating from their 18-day ordeal.

The youngest, 11, appeared asleep under a crisp white sheet while others, including their 25-year-old soccer coach, sat in bed, their faces obscured by green surgical masks.

Nurses chatted with them and the boys responded with the customary Thai sign of respect — hands pressed together while bowing the head.

Parents watched and waved from behind a glass barrier, their faces vivid with emotion.

“Don’t need to worry about their physical health and even more so for their mental health,” said Chaiwetch Thanapaisal, director of Chiang Rai Prachanukroh Hospital.

“Everyone is strong in mind and heart,” he said Tuesday at a news conference of officials involved in the high-risk rescue effort.

The four boys and soccer coach brought out Tuesday on the final day of an all-out three-day push to save all of them had recovered more quickly than the boys rescued on Sunday and Monday, Chaiwetch said.

Even so, all need to be monitored in the hospital for seven days and then rest at home for another 30 days, he said. Three have slight lung infections.

Another video released on Facebook by Thailand’s Navy SEALs, who were central to the rescue, apparently shows one of the boys being carried through part of the muddy cave on a stretcher covered by an emergency thermal blanket.

The group had entered the sprawling Tham Luang cave to go exploring after soccer practice on June 23, but monsoon rains soon filled the tight passageways, blocking their escape. They were found by a pair of British divers nearly 10 days later, huddled on a small, dry shelf just above the water, smiling with relief but visibly skinny.

The complex mission for international and Thai divers to guide the boys and coach through the cave’s flooded and tight passageways riveted people worldwide. Highlighting the dangers, a former Thai navy SEAL volunteering to work on the rescue efforts died Friday while replenishing oxygen canisters that were placed along the escape route.

Narongsak Osatanakorn, the official overseeing the rescue operation, said the boys should not be blamed for the near tragedy.

He lauded the cooperation between Thai and international rescuers.

“The situation went beyond just being a rescue mission and became a symbol of unity among mankind,” he said. “Everyone worked together without discrimination of race or religion as the ultimate goal was to save the youth football team.”

Each of the boys, ages 11 to 16 and with no diving experience, was guided out by divers though rocky, muddy and water passages that in places were just a crawl space.

The method was extremely risky, but dwindling oxygen levels in the cave and fears of more monsoon rains to come made a decision urgent. Relatively mild weather and a massive effort to pump out water created a window of opportunity. And the confidence of the diving team, and expertise specific to the cave, grew after its first successful mission Sunday.

Thongchai Lertwilairatanapong, a public health inspector, said earlier Tuesday that the boys lost an average of 2 kilograms (4.4 pounds) while they were trapped. Before their discovery, they survived by drinking water dripping into their cramped refuge.

“To not receive food, we can still survive for many months, but what’s necessary is water, which the cave has, and around this time there’s a lot in the cave, and they chose clean water to drink,” he said.