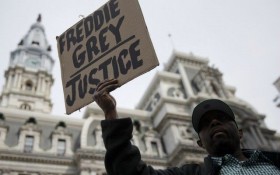 A Baltimore judge scheduled a retrial date Monday following the mistrial of one of six officers charged in connection with the death of Freddie Gray.

A new trial for William Porter has been scheduled for June 13; the other five officers will be tried before that, meaning prosecutors may no longer go through with their initial plan to use Porter as a witness in any of those trials.

Prosecutors had said they wanted to try Porter first, and later call him to testify against at least two other officers facing criminal charges, but Porter has a Fifth Amendment right not to incriminate himself on the stand. He could assert that right if the state tried to call him as a witness before his retrial.

David Weinstein, a Miami-based trial attorney and former prosecutor, said the decision to schedule Porter’s trial after the other officers are tried isn’t surprising, but he noted that the hung jury certainly complicated the state’s plans.

“They’re punting. I think politics is playing a role in all of this,” Weinstein said. “If instead of having to now say, ‘We don’t believe our case against Porter is strong enough, or we need to use Porter to get a conviction against other people,’ they’re moving him down the line, to the second-best case. They likely think, ‘Hopefully we’ll get a better result, and that will send a message to Mr. Porter that the deadlock was just those 12 people.’ Part of these prosecutions is a chess game.”

Porter’s trial lasted more than two weeks. Jurors deliberated the charges for roughly 16 hours before telling the judge, Barry Williams, that they were impossibly deadlocked on every charge. Williams declared a mistrial last Wednesday.

Porter faces manslaughter, assault, reckless endangerment and misconduct in office. Gray died April 19, a week after he suffered a broken neck in the back of a police transport wagon. Prosecutors say Porter is partially responsible because he didn’t buckle Gray into a seat belt or immediately call for an ambulance when Gray indicated he needed medical attention.

Porter, who took the stand for more than four hours, told jurors that he didn’t think Gray was injured when he lifted the man off the floor of the van, where he’d been lying handcuffed with his legs shackled. Porter also said he told the wagon driver, Caesar Goodson, as well as a supervisor to take Gray to a nearby hospital, and that it was Goodson’s responsibility to make sure the prisoner was buckled in.

Goodson’s trial is slated to begin Jan. 6. He faces the most serious charge: second-degree “depraved-heart” murder.

Gray’s death prompted peaceful protests in Baltimore and, on the day of his funeral, looting and violence that spread across the city and resulted in millions of dollars in property damage. His name became a rallying cry, and added fuel to the national Black Lives Matter movement.

On the day of Porter’s mistrial, some demonstrated outside of the courthouse and beside City Hall, and two arrests were made.