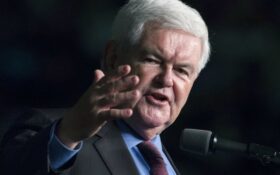 Fox News star and former Speaker of the House Newt Gingrich is making a big promise ahead of the Vice Presidential debate between Mike Pence and Kamala Harris.

With a little more than a day to go he’s teasing that the showdown will be a “truly historic encounter.”

Whereas the debate between President Donald Trump and Joe Biden was more of a clash of personality and leadership, this one — Gingrich says — has all the makings of an old school political battle.

He says the issues will take center stage, not necessarily the candidates.

After all, Gingrich notes that Pence and Harris are such vastly different political creatures. They disagree on nearly everything from law and order to illegal immigration laws. In fact, Gingrich went so far as to call Harris the single most “bigoted anti-Catholic” politician since the 19th century over her views of Supreme Court Justice nominee Amy Barrett.

They clash heads over the following:

Gingrich is adamant that Pence represents the candidate who is trying to restore the foundational American values across all these issues.

He said Harris’ goal is to get elected, unravel the fabric of the republic, and undo the system holding it together.

And Gingrich is convinced the debate will make that clear to American voters.