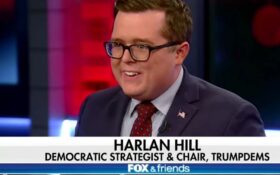 “I tweeted what I tweeted and I’d tweet it again,” he told The Daily Beast in an interview.

During the Wednesday vice presidential debate, Hill referred to Harris as “insufferable lying b****” in a widely-shared tweet.

His comments were widely condemned on the platform, and critics called them sexist and inappropriate.

In response to the criticism, a Fox News representative said the network would no longer book Hill as a contributor or guest.

“We have no intention of booking him as a guest on any of our platforms,” a Fox News Media spokesperson said in a statement.

Hill defended his rhetoric during an interview with The Daily Beast, and said Harris was “extraordinarly disrepsectiful to the vice president” and “lied to the American people repeatedly on The Biden-Harris platform.”

Hill has not been on Fox News this year. But he was reportedly booked, as a non-paid consultant, on Fox Business Channel in June.

Hill first gained attention as an outspoken supporter of Sen. Bernie Sanders, I-V.T., who switched his support to the Trump campaign in 2016.

He has made at least 47 appearances on either Fox News or Fox Business since 2017.