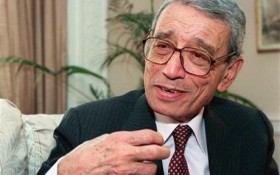 Venezuela’s U.N. Ambassador Rafael Ramirez, the current council president, made the announcement at the start of a meeting on Yemen’s humanitarian crisis Tuesday and asked members to rise for a moment of silence.

Boutros-Ghali, an Egyptian politician and diplomat, was the sixth secretary-general of the United Nations, serving from January 1992 to December 1996.