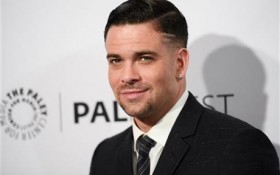 Police Officer Tony Im says the 33-year-old actor was taken into custody Tuesday after a warrant was served at his home in the Sunland area.

Im says Salling had been investigated by the LAPD’s Internet Crimes Against Children Task Force, but he did not elaborate.

Representatives for Salling did not respond to requests for comment. Im didn’t know if Salling has a lawyer.

Salling is best known for playing bad-boy Noah “Puck” Puckerman on TV’s musical dramedy “Glee,” which aired on Fox from 2009 until earlier this year.

He shared a Screen Actors Guild award with the cast in 2010, when they won for outstanding TV comedy ensemble.

Salling is also a musician and released his debut album “Pipe Dreams” in 2010.

The Associated Press contributed to this report.
View older comments