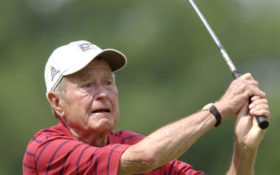 Former President George H.W. Bush was once known for playing golf at breakneck speed. Now collectors have an opportunity to own some of his golfing history.

Robert Livingston from RR Auction said Bush gave the items to a worker at the Cape Arundel Golf Club in Maine, where the 41st president spends his summers. The auction ends Wednesday.