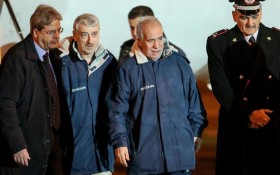 An Italian construction worker who escaped after nearly eight months in captivity in Libya says he used a nail to slowly loosen the lock from the hardwood doorframe.

Filippo Calcagno told reporters outside his home in Sicily that once the fixture was loose, he called Gino Pollicardo to help kick the door open. Calcagno said they were worried “another group would come and take us” but they managed to get to the street and find police.

Calcagno said the pair were together with the two other Italian workers abducted with them in July until last week, and only learned after returning to Italy on Sunday that the others had been killed. He said that he did not know the affiliation of their captors, calling them “criminals.”