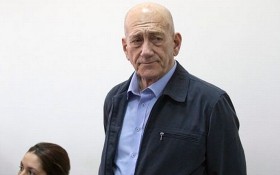 Israel’s Supreme Court on Tuesday reduced former Prime Minister Ehud Olmert’s prison sentence for a sweeping bribery scandal from six years to 18 months, handing him a moral victory even as he prepares to become the first former Israeli head of government to be imprisoned.

In its ruling, the court overturned the main bribery charge against Olmert but upheld a lesser charge. The 70-year-old ex-premier was ordered to begin serving his sentence on Feb. 15.

Olmert was convicted in March 2014 and sentenced to six years in a wide-ranging case that accused him of accepting bribes to promote a controversial real-estate project in Jerusalem. The charges pertained to a period when he was mayor of Jerusalem and the country’s trade minister, years before he became prime minister in 2006.

Olmert has denied any wrongdoing and was allowed to stay out of prison until the verdict on his appeal was delivered.

After Tuesday’s decision, Olmert said he was “satisfied” about his partial exoneration. Clearly relieved, Olmert said it was still a “hard day” but that he accepted the Supreme Court’s ruling.

“A stone has been lifted from my heart,” he said. “I said in the past, I was never offered and I never took a bribe. And I say that again today.”

The ruling marks a dramatic climax of the lengthy legal saga of a man who only years earlier led the country and hoped to bring about a historic peace agreement with the Palestinians.

Olmert was forced to resign in early 2009 amid the corruption allegations. His departure cleared the way for the election of hard-liner Benjamin Netanyahu, and subsequent Mideast peace efforts have failed.

Olmert was a longtime fixture in Israel’s hard-line right wing when he began taking a more moderate line toward the Palestinians as deputy prime minister a decade ago. He played a leading role in Israel’s withdrawal from the Gaza Strip in 2005.

He became prime minister in January 2006 after then-Prime Minister Ariel Sharon suffered a debilitating stroke. He subsequently led their newly formed Kadima Party to victory in parliamentary elections on a platform of pushing further peace moves with the Palestinians.

A gifted orator, Olmert crossed a series of taboos while in office — warning that Israel could become like apartheid South Africa if it continued its occupation of the Palestinians and expressing readiness to relinquish control of parts of the holy city of Jerusalem as part of a peace deal.

He led his government to the Annapolis peace conference in November 2007 — launching more than a year of ambitious, but unsuccessful peace talks with the Palestinians. Olmert enjoyed a warm relationship with then President George W. Bush.

Olmert has said he made unprecedented concessions to the Palestinians during those talks — including a near-total withdrawal from the West Bank and an offer to share control of Jerusalem — and was close to reaching an agreement at the time of his resignation.

The Palestinians have said his assessment was overly optimistic.

In a recent documentary, Palestinian President Mahmoud Abbas said Olmert had made a serious offer, but pressured him to sign the deal without allowing him to look at a map for the border Olmert proposed. Abbas said that at the time, he also expressed doubts over Olmert’s ability to carry out a deal because of his legal problems and impending resignation.

Despite his ambitious agenda, Olmert’s term was clouded by the kidnapping of an Israeli soldier who was captured by Gaza militants in a cross-border raid and an inconclusive war against Hezbollah guerrillas in Lebanon. Both occurred shortly after he took office. Olmert also launched a military invasion of the Gaza Strip in late 2008 that drew heavy international criticism.

But it was corruption allegations, which had dogged him throughout his career, which ultimately proved his undoing. He was forced to announce his resignation in late 2008 and left office early the following year.

Tuesday’s ruling focused on the “Holyland” real-estate project — a sprawling high-rise apartment complex built on a Jerusalem hilltop that local residents love to hate because of its imposing appearance. Local zoning laws were changed to make way for the project.

It marked a stark departure from the harsh 2014 Tel Aviv District Court ruling, where Judge David Rozen accused Olmert of undermining the public’s trust and called him a “traitor.” The money was earmarked for Olmert’s cash-strapped younger brother, Yossi, but four of the five justices ruled it could not be proved beyond a reasonable doubt that Olmert was involved or aware of the transaction.

However, the top court did maintain a lesser conviction against Olmert of taking a 60,000 shekel ($15,000) bribe. Barring any unforeseen intervention, Olmert is to report to prison on Feb. 15.

The ruling also all but ended any hopes that Olmert, who was once seen as the most formidable opponent to Prime Minister Benjamin Netanyahu, might return to politics.

Tuesday’s conviction included a ruling of “moral turpitude,” meaning that Olmert would be barred from politics for an additional seven years after serving his time.

In a separate case, Olmert was sentenced earlier this year to eight months in prison for unlawfully accepting money from a U.S. supporter. He is also appealing that sentence. If the appeal is rejected, that prison time could be added to Tuesday’s verdict.

Aside from the embarrassment of having a former prime minister charged and put on trial for bribery, the case was seen in Israel as a barometer of the country’s fiercely independent legal system and a point of pride in proving that no one is above the law.