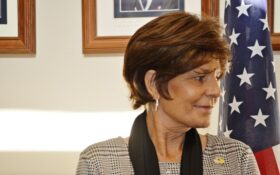 A Republican seeking to unseat Democratic U.S. Rep. Xochitl Torres Small in a crucial House seat in New Mexico picked up an endorsement Tuesday from an unusual ally — the Democrat that formerly held the seat.

Former U.S. Rep. Harry Teague, who once held Torres Small’s seat, said in a statement that he is backing Yvette Herrell in November. Teague said Herrell appreciates the impact the energy industry has on the state and will reach across party lines.

Teague held the southern New Mexico seat 2009 until 2011 and was the first Democrat to win it in nearly 30 years. He was ousted after voting for a bill aimed at curbing greenhouse gasses.

Herrell said the endorsement shows her campaign is building bridges across party lines.

In a statement, Torres Small said Teague spent one term working hard to represent the people of southern New Mexico but did not address Teague’s support of her opponent.

“I appreciate his service and wish him well,” Torres Small said.

Torres Small beat Herrell in 2018 by less than 4,000 votes and issues around oil and natural gas are expected to play central roles in this closely watched U.S. House rematch. The district sits in the part of the Permian Basin drilling area.

It’s one of the nation’s richest and most prolific oil and natural gas regions and helps New Mexico fund its public education system.

Since taking office, Torres Small has clashed with more liberal Democrats in Congress who have been pushing for the so-called New Green Deal or proposals to ban fracking.

The New Mexico Oil & Gas Association, which represents petroleum producers, said the Las Cruces Democrat’s record show she understands the role that the oil and gas industry plays in the state.

“Throughout her first term in Congress, she has been a strong advocate for our state’s energy interests and responsible production and has stood up to those in her party who want to completely ban fracking,” said Ryan Flynn, the association’s executive director.