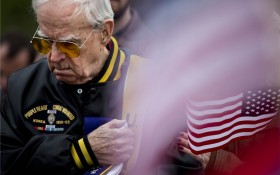 The cremated remains of 14 war veterans and the spouses of seven other service members have been laid to rest years after their deaths.

Thanks to the Missing in America Project, they were remembered Saturday before their burial at the South Florida National Cemetery in Lake Worth.

The Sun Sentinel reports they hailed from all branches of the military and served in World Wars I and II, and the Korean and Vietnam wars. Their mahogany urns bore gold plaques that read: “You are not forgotten.”

The nonprofit group searches for unclaimed military remains. They verify with the National Cemetery Administration that the remains are from those who served in the military and then bury them.

All participants volunteered their services.