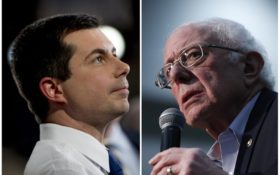 Even though the final vote total from the Iowa caucuses hasn’t yet been released, some new poll numbers out of New Hampshire are out — and they could throw the entire 2020 Democratic race into chaos.

Sen. Bernie Sanders, I-V.T. has suddenly carved out a huge lead over his rivals.

The numbers from a Boston Globe/Suffolk University poll show Sanders leading the pack with 24 percent of support from voters surveyed.

Buttegieg’s New Hampshire surge comes at a critical time. Early numbers so far out of Iowa hint that he’s the winner in the Hawkeye State, although many more votes have to be counted.

Meanwhile, Biden’s slip has been drastic — and has allowed Sanders to grab a huge lead heading into next week’s vote. Experts project Biden finish 4th in Iowa — and the same result may be waiting for him in the Granite State.

WBZ 4 Boston is reporting that most of the New Hampshire polling took place before the Iowa caucus results released, polling officials say that political trends are crucial.

That means Biden could fall even further.

“Biden’s drop and Buttigieg’s spike might be temporary movements, we’ll see if the trends hold. But people in that [55 to 65] age category have been around, they’ve seen political trends before, and they may be seeing the writing on the wall for Biden.”

Political pundits also theorize that Buttigieg may have peeled off voters from Sen. Elizabeth Warren, D-Mass., who experienced a slight dip in the polls, falling to around 10 percent.

If Buttegieg’s spike in popularity among Democrats continues, critics are saying it could potentially burst Warren’s campaign bubble for good.

But will it be enough to stop Sanders heading towards Super Tuesday?