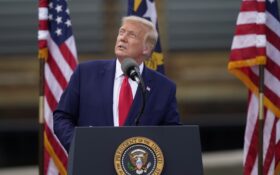 President Donald Trump is losing in the polls to former Vice President Joe Biden – but his team insists those numbers don’t tell the true story.

And a look at some key data indicates they just might be right yet again.

It comes down to Trump’s secret weapon, and that’s mobilizing voters who are “hidden” from the polls, or show up only deep down in the data in ways the mainstream media never quite recognizes.

In Florida, for example, data from Trump’s big rally in Sanford – just outside Orlando in the crucial I-4 corridor – found some “inconvenient truths” for the Joe Biden camp.

The thousands who attended weren’t all core Republican voters.

According to RNC chair Ronna McDaniel, a third weren’t Republicans at all – while 16 percent identified as Democrats.

Better still for Trump’s chances in the key state: One in four of those who attended didn’t vote in 2016, and nearly 15 percent didn’t vote in the last four elections. Trump is bringing out Americans who don’t even identify as devoted voters!

There’s also another core factor for Florida and beyond, and that’s a dramatic shift in the voter demographics that could hand Trump a surprise victory.

It’s in a core group of voters that Democrats have assumed are in the bag for the left – but data hidden in the cross-tabs of the latest polls show it’s quietly fleeing the party in droves.

They’re the Latinos of America, who are swinging increasingly toward Trump.

One recent Economist/YouGov poll found 34 percent of Latino voters are now backing Trump, a number that will likely grow by a few points given that 9 percent are undecided. In the 2012 and 2016 elections, by comparison, just 27 percent of Latinos voted Republican.

“The movement of somewhere between 6 percent and 15 percent of Latino voters is potentially significant enough to impact the outcome in states like Florida and North Carolina,” noted Vanity Fair in a recent analysis of the voting data.

And it could put a stop to Democratic dreams of taking states in the Sun Belt such as Texas and Arizona.

But Florida is where it could matter most, because the Latino vote there has one core difference: it’s the home of some 1.5 million Cuban-Americans, one of the most engaged groups of voters in the state.

Since taking office, Trump has imposed new sanctions on Cuba and reversed Obama-era policies toward the communist nation that were wildly unpopular among the exiles… which means he could expect an even bigger share of the Cuban-American vote this time around.

While Trump works to bring these and other new voters to his rally – and to the polls – Biden is pulling the opposite strategy.

He’s playing it safe – maybe too safe – as he rests on his seemingly big lead and attempts to run out the clock.

“They don’t want to break anything in the last three weeks,” one Democratic strategist told The Hill. “If the election were held today, they would win. They know it, and more importantly, Trump knows it.”

But with more than two weeks left, that could come back to haunt them as Trump uses that time to regroup, rebuild his core support and use his surge in rallies around the nation to drive turnout.

That has some in Biden’s camp openly worried.

“[T]here is still a long way to go in this campaign,” Biden campaign managers Jen O’Malley Dillon wrote on Twitter. “And we think this race is far closer than folks on this website think. Like a lot closer.”

And that could be the recipe for another November surprise.