Footage of deadly ambush on US troops released - The Horn News 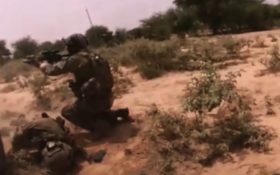 On Sunday, ISIS released a disturbing video showing their fighters ambushing and killing four U.S. special forces operatives in Niger. The video was titled “The Attack of the Brave on the U.S. Army: Tongo Tongo Battle.”

The jolting video is shot from what appears to be helmet cameras on the soldiers that died on October 4, 2017. The footage offers a glimpse into the last moments of these heroes brave fight while surrounded and outnumbered by radical Islamic terrorists.

Responsibility for the attack was not taken by ISIS until January 2018.

There was questioned raised after the incident that cost these four soldiers their lives, but the video sheds light on what really occurred — these brave  Americans fought until the bitter end.

“The men were outnumbered and once fire superiority was lost due to the nature and execution of the ambush, the situation quickly began to deteriorate,” SOFREP reported. SOFREP is a news organization for former Special Forces operatives.

“The team was caught out in the open with only their [unarmored] vehicles and what looks to be a B6 Land Cruiser [armored] to use as cover and the militants were dispersed throughout a tree line in greater numbers.”

The October attack raised many questions regarding the reasoning for U.S. forces to be stationed in Niger. About 800 military personnel are currently stationed there for training of local forces and operation of drones.

Following the release of the footage, an online channel associated with ISIS sent a message out to other ISIS hopefuls. The channel told the would-be lone wolves to be inspired by the video and attack other citizens of ‘Crusader coalition countries.’

The Horn News editorial team will not share that message of hate; instead, we’re committed to sharing only the footage that honors these heroes’ valiant last stand.

Questions still remain about how the attack unfolded, but one thing remains clear: these men were true warriors and deserved to be honored.