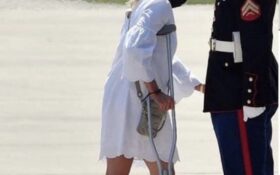 On Friday Jill Biden, 70, was spotted in public for the first time since July, People Magazine reported. She was wearing a crutch and a medical boot.

She appeared to be receiving assistance from President Joe Biden, 78, as she was boarding Marine One.

In July the first lady was visiting military families in Hawaii, and she suffered a puncture wound while walking on a beach. She later underwent surgery at Walter Reed National Military Medical Center in Bethesda, Maryland.

Her representative Michael LaRosa stated, “Prior to her two official events in Hawaii, the First Lady stepped on an object on the beach which became lodged in her left foot. … The First Lady underwent a successful procedure on her left foot to flush out debris from a puncture wound.”

Wearing a boot and holding a crutch, first lady Jill Biden is assisted by Pres. Biden as they board Marine One to fly to Camp David from Wilmington, Delaware. https://t.co/qJdhaANvhT pic.twitter.com/6vGFfAbrcW

. @FLOTUS photographed with her boot and crutch on her way to Camp David today. Biden had a procedure on her foot following an injury she sustained walking on the beach in Hawaii last month. I am told the boot and crutches are standard recovery procedure. pic.twitter.com/LhJK6qENIy

LaRosa continued, “After inspection of the wound by medical staff, it is unclear what object caused the puncture. The wound is now clean, free of infection and it is anticipated that it will heal nicely.”

On Friday CNN’s Kate Bennett tweeted a photo of the first lady’s boot and crutch. She added, “I am told the boot and crutches are standard recovery procedure.”

In these photos, the first lady was at Delaware Air National Guard Base in New Castle, Delaware. She and President Biden were traveling to the presidential retreat in Camp David, Maryland.