Florida inmate cries "murders!" as he is executed - The Horn News 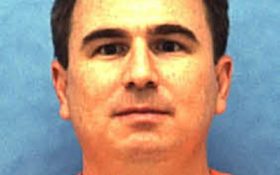 As the execution drugs were being administered, inmate Eric Scott Branch let out a blood-curdling scream. Then he yelled “murderers! murderers! murderers!” as he thrashed on a gurney as he was being put to death for the 1993 rape and slaying of a college student.

The drugs included a powerful sedative Thursday evening and the 47-year-old inmate, following the outburst, gave a last guttural groan and turned silent. Minutes earlier, he had just been addressing corrections officers, saying it should fall to Florida Gov. Rick Scott and his attorney general to carry out the death sentence — not to those workers present.

“Let them come down here and do it,” Branch said. “I’ve learned that you’re good people and this is not what you should be doing.”

Branch was pronounced dead at 7:05 p.m. Thursday after receiving the injection at Florida State Prison in Starke. The governor’s office made the announcement.

Asked later whether Branch’s scream could have been caused by the execution drugs, Department of Corrections spokeswoman Michelle Glady said “there was no indication” that the inmate’s last actions were a result of the injection procedure. She said that conclusion had been confirmed by the Florida Department of Law Enforcement.

Branch was convicted of raping and fatally beating University of West Florida student Susan Morris, 21. Her naked body was found buried in a shallow grave — a crime whose brutality was noted by the Florida Supreme Court in denying one of Branch’s appeals.

“She had been beaten, stomped, sexually assaulted and strangled. She bore numerous bruises and lacerations, both eyes were swollen shut,” the justices wrote.

Evidence in the case shows Branch approached Morris after she left a night class on Jan. 11, 1993, so he could steal her red Toyota and return to his home state of Indiana. He was arrested while traveling there.

Branch also was convicted of sexually assaulting a 14-year-old girl in Indiana and of another sexual assault in the Florida Panhandle that took place just 10 days before Morris was killed, court records show.

The jury in his murder case recommended the death penalty by a 10-2 vote under Florida’s old capital punishment system, which was ruled unconstitutional by the U.S. Supreme Court in 2016. The high court said juries must reach a unanimous recommendation for death and judges cannot overrule that. Florida legislators subsequently changed the system to comply.

One of Branch’s final and unsuccessful appeals to the U.S. Supreme Court involved whether he deserved a new sentencing hearing because of that jury’s 10-2 vote in his 1994 trial. The Florida Supreme Court has ruled that the new system of sentencing did not apply to inmates sentenced to death before 2002.

Elsewhere, Texas’ governor spared a convicted killer’s life shortly before the inmate was to have been executed Thursday for masterminding the fatal shootings of his mother and brother. Gov. Greg Abbott accepted the state parole board’s rare clemency recommendation and commuted the sentence of Thomas “Bart” Whitaker to life without parole. Whitaker’s father also was shot in the 2003 plot at the family’s suburban Houston home but survived. He led an effort to save his son from execution.

And in Alabama, officials postponed the execution of Doyle Lee Hamm, who was scheduled to die Thursday evening for the 1987 death of a motel clerk during a robbery. Hamm fought his death sentence, arguing there was a risk of a botched execution because of damage to his veins from lymphoma and other illnesses. The U.S. Supreme Court delayed the execution Thursday evening to consider Hamm’s request to block it, but then gave the go-ahead about 9 p.m. Corrections spokesman Bob Horton said there was not enough time to prepare Hamm before the death warrant expired at midnight.

In Florida, relatives of victim Susan Morris said they remain profoundly grieved by her violent death. Though Morris was 21 when she was killed, more time has passed than the number of years she lived, the family statement said. Still, the pain remains.

“Twenty-five years ago, Susan’s life was suddenly and brutally extinguished. We have grieved for her longer that she was with us. Yet because of who she was … she will never be forgotten by those who love her,” said the statement, read out by her sister Wendy Morris Hill shortly after Branch was put to death.