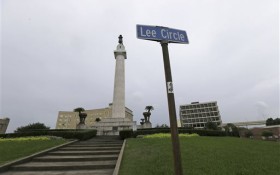 One by one, the four Confederate-era monuments came down in New Orleans, removed because of outrage by those who saw reminders of slavery and white supremacy chiseled in their stone faces. But at least one Louisiana lawmaker who argued earlier this year against protecting such statues found her inbox flooded with emails overwhelmingly in support of the monuments staying put.

More than 100 emails were obtained by The Associated Press through a public records request. They showed that opposition to the removal of Louisiana’s statues ranged from short and cordial pleas to long, angry messages about wiping away history. The messages were sent in April and May as New Orleans removed monuments that long paid homage to Confederate President Jefferson Davis, Gen. Robert E. Lee and others.

Confederate statues, flags and plaques have faced new scrutiny since a white supremacist – who previously brandished Confederate battle flags in photographs – killed nine African-Americans in a South Carolina church in 2015. Around the South, authorities debate whether such symbols represent racism or an honorable heritage.

“Our history is our history and we should not allow elected officials to pick and choose what parts of history get destroyed or get revered,” one email said. Another declared: “Cannibalizing cultural memory is not progress.”

“If you do not vote to support our state’s historic landmarks then you are siding with these Neo Communist Anti American Anarchists against the will of 73 percent of the citizens of Louisiana,” said one email blast to nearly every House lawmaker, citing a 2016 LSU Reilly Center for Media and Public Affairs poll.

Sponsored: Cancer on the menu? Don’t eat this one food

And many emails directed anger at New Orleans Mayor Mitch Landrieu for championing removal of statues, calling him an “embarrassment” and a “tyrant.” The first white mayor of mostly black New Orleans in decades, Landrieu called the statues celebratory of a South that defended slavery.

“Why allow (Landrieu) … to rape our city and state of it’s (sic) history?” read one email. “The bonfire he is inflicting on New Orleans will soon have its embers spread to your districts.”

Landrieu’s office told AP the mayor and the City Council had followed the legal process to remove the monuments, holding numerous public meetings.