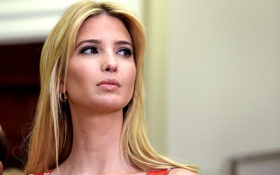 Dick became the biggest target of the #MeToo movement this week after the Los Angeles City Attorney’s office announced they will be charging him with misdemeanor sexual battery for groping a woman on a sidewalk.

When the comedian and Ivanka sat together for an appearance on Jimmy Kimmel Live years go, things got pretty awkward quickly… and even comedian Jimmy Kimmel had to tear Dick off of her.

The resurfaced video shows Ivanka and Dick sitting side-by-side, and Ivanka is trying to talk to Kimmel while Dick begins to touch Ivanka’s leg.

“You don’t play up the glitter on your legs?” Dick asks, as he begins to rub Ivanka’s legs.

Ivanka tries to slap Dick’s hand away, but he did not stop touching her. Ivanka’s body language clearly shows how uncomfortable she was, but she continued to try and laugh it off.

“Oh wait, did I say I was single? I thought I had a boyfriend,” Ivanka said as she tried to remove Dick’s hands.

Kimmel eventually is forced to get out of his seat and pull Dick off of Ivanka.

“Andy, please don’t,” Kimmel said. “Donald Trump will kill both of us.”

Kimmel later revealed to People magazine that Dick had to be carried off the stage by security.

“She came out, he wanted a big, wet kiss. It was time for Andy to go, so I escorted him out by his feet,” Kimmel said at the time.

This video has resurfaced at a time when liberal Hollywood has been outspoken on their criticism of men sexually harassing women… and yet there has been no outcry over this cringeworthy incident.

No matter what your political opinions are, this type of behavior is not acceptable towards any woman.

This man deserves a jail cell right next to all the other creeps in Hollywood.