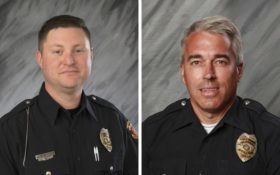 Ohio’s governor on Monday ordered flags flown at half-staff around the state to honor two police officers killed over the weekend in suburban Columbus.

The order from Republican Gov. John Kasich applies to flags at public properties and will be in place until the officers are interred.

The order came hours before police in suburban Westerville were slated to escort the bodies of 39-year-old Eric Joering and 54-year-old Anthony Morelli from a coroner’s office to separate funeral homes. Officials invited the public to line the route.

The officers were shot Saturday while responding to a 911 hang-up call at a townhome where the 30-year-old suspect was wounded.

Officials said Sunday that suspect Quentin Smith was hospitalized in stable condition and expected to survive.

Smith was sentenced to three years in prison in 2009 on a burglary conviction with an added enhancement of having a gun. He left prison in 2011 and was released from parole, called community control in Ohio, in November 2013, according to the Ohio Department of Rehabilitation and Correction.