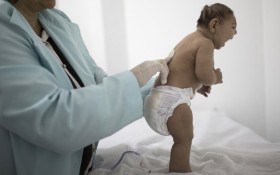 Health officials have long warned that the Zika virus will soon start affecting births in the United States mainland. Now, tragically, it appears to have finally happened.

A New Jersey doctor says a baby just born to a mother with the Zika virus appears to be affected by the disease.

Dr. Abdulla Al-Khan, the hospital’s director of maternal-fetal medicine and surgery, says the mother came to the U.S. to seek treatment after Zika symptoms were discovered. He says the virus was later confirmed.

Al-Khan says an ultrasound last week revealed birth defects, including microcephaly, in which the baby’s head is smaller than expected because the brain hasn’t developed properly.

The doctor says the baby looks “completely Zika-affected,” but confirmation of the virus in the infant is pending testing.

A baby in Hawaii was born with microcephaly related to Zika earlier this year.