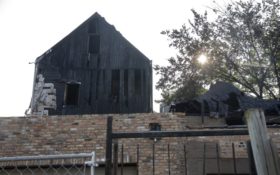 A Chicago Fire Department official says it appears the nine children who died in a weekend apartment fire and another who remains in critical condition were overcome by smoke as they slept and never awoke to make an escape.

Larry Langford says firefighters found the bodies of 10 juveniles scattered about the apartment where they had been having a sleepover. He says the fire department mistakenly initially believed that two of the victims were adults.

He says there’s no indication that any of them were trying to flee when the fire started before dawn on Sunday.

Investigators are still trying to determine the cause of the fire that started on a rear porch. Langford has said the lack of any working smoke detectors turned the fire deadly.