FIRE HER! Nancy Pelosi digs in her claws, tells voters... - The Horn News 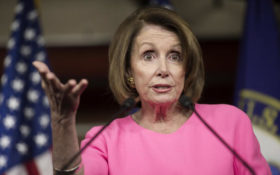 House Minority Leader Nancy Pelosi has been under attacks for months. Conservatives and liberals don’t agree on much, but the two sides have banded together and begun demanding her ouster.

Pelosi has become so unpopular, in fact, her own political party is running against her.

That fact doesn’t seem to bother Pelosi, however. Power, not popularity, appears to be her goal. Despite calls for her firing from both sides of the aisle, Pelosi has no intention of leaving. That’s what she told MSNBC’s “Morning Joe” last Wednesday.

Pelosi said she was “pretty confident” her reputation as a “master legislator” would help her weather the storm, and that she would remain in charge of the Democratic Party in the House.

The calls for her ouster have ramped up in recent months, as Pelosi has been unable to effectively “resist” President Donald Trump’s administration. Even potential Democrats know that voters loathe Pelosi so strongly, and they’ve started spending their precious campaign money attacking her.

“My opponent wants you to believe that the biggest issue in this campaign is Nancy Pelosi. It’s all a big lie,” Democrat Conor Lamb said in a campaign ad in Pennsylvania. “I’ve already said on the front page of the newspaper that I don’t support Nancy Pelosi. The real issues are the ones that affect your lives.” Lamb’s election is still up in the air pending an investigation into voter irregularities.

“I don’t think he ran against me the entire time. I think he ran on his positive agenda,” Pelosi said when asked about Lamb’s attacks. “I feel pretty confident about my ability — first and foremost — to be a master legislator for the good of the American people. I have proven that.”

This isn’t the first call for Pelosi to step aside — nor was it the first time she referred to herself as a “master legislator” as a defense.

Will she ever leave?

Should Nancy Pelosi be FIRED?