FINALLY! Trump officially cleared of any collusion with Russia - The Horn News 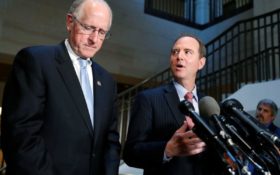 The House intelligence committee on Friday released a lengthy report concluding it found no evidence that Donald Trump’s campaign colluded with Russia in the 2016 presidential campaign, a finding that drew praise from the president.

The report caps an investigation that began with the promise of bipartisanship but quickly transformed into an acrimonious battle between Democrats and Republicans over Russia’s meddling in the 2016 election and whether there were any connections with the Trump campaign.

But the committee’s Republicans didn’t let the Trump campaign completely off the hook. They specifically cited the Trump campaign for “poor judgment” in taking a June 2016 meeting in Trump Tower and dubbed the campaign’s praise of WikiLeaks “objectionable.”

“While the committee found no evidence that the Trump campaign colluded, coordinated, or conspired with the Russian government, the investigation did find poor judgment and ill-considered actions by the Trump and Clinton campaigns,” the House Intelligence Committee wrote.

The report’s conclusion is fiercely opposed by committee Democrats, who accused their Republican colleagues of playing “defense counsel” for the White House throughout the investigation.

The House investigation is the first of several inquiries probing Russian election interference. An investigation led by special counsel Robert Mueller is ongoing, as are probes led by the Senate intelligence and judiciary committees.

The House investigation began with bipartisan promise but ultimately succumbed to factional squabbling. But the probe did provide important public revelations.

Former FBI Director James Comey chose the March 20, 2017, hearing of the House intelligence committee to publicly reveal that the FBI had been investigating the Trump campaign since July 2016.

One day later, the committee’s chairman, Devin Nunes, took a trip to the White House grounds to review classified information that quickly drew scrutiny after he publicly disclosed that Trump associates’ communications had been wiretapped by U.S. spy agencies and accused Obama administration officials of misconduct.

The episode drew questions about whether Nunes was coordinating with the White House and ultimately led to his recusing from the probe amid an ethics investigation into whether he mishandled classified information. Nunes was totally cleared of wrongdoing, but never formally rejoined the House investigation. Instead he launched a pair of investigations on his own, taking aim at the Justice Department and FBI.

At the start of 2018, Nunes and the committee’s Republican staff crafted a memo revealing details of the FBI’s surveillance of former Trump campaign aide Carter Page. Trump ultimately chose to declassify the sensitive contents of the memo — including details from the Foreign Intelligence Surveillance Act application for Page.

The House panel did find that Russia sought to sow discord in the U.S. through cyberattacks and social media. Some portions of the public report are redacted for national security reasons. Republicans say they will pressure intelligence agencies to be able to release more information.

In a statement, Conaway said he was “extremely disappointed with the overzealous redactions” made by the intelligence agencies. He said many of the blacked out details include information already public such as witness names and previously declassified information.

Conaway said the committee had pledged to be “as transparent as possible” with the report.

“I don’t believe the information we’re releasing today meets that standard, which is why my team and I will continue to challenge the IC’s many unnecessary redactions with the hopes of releasing more of the report in the coming months,” he said.

House investigators cautioned that Russia will continue meddling in U.S. elections and suggested some fixes that would help the government and politicians better defend against that interference.

The panel wrote that intelligence officials should immediately alert presidential candidates when they discovers “legitimate” threats to the campaign and also tell Congress. The panel also recommended the executive branch “crack down” on leaks by conducting polygraphs of all for limited certain employees with top secret clearances.