AOC stunned in fiery debate: "Leave my mom out of it!" - The Horn News 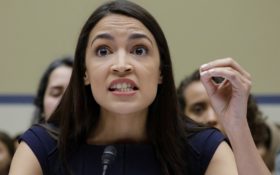 Rep. Alexandria Ocasio-Cortez, D-N.Y. has quickly made her fair share of political rivals during her freshman term on Capitol Hill.

There’s no shortage of names that want to take her congressional district seat.

Monday, she was forced to come face-to-face with perhaps her biggest political threat — and her opponent left AOC stunned during their fiery debate.

Caruso-Cabrera, the former CNBC anchor, blasted AOC for living it up in her cozy Washington D.C. apartment while the global pandemic wreaked havoc on New York City.

“What I don’t understand is why AOC is always MIA,” Caruso-Cabrera said, an acronym for Missing In Action. “At the height of the crisis, she stayed in her Washington D.C. apartment with a Whole Foods in the lobby and didn’t come home even though Congress wasn’t in session.”

Ocasio-Cortez downplayed the glaring absence by saying she was feeling unwell at the time, and therefore did not return to her home district.

The debate touched on several issues including the economic impact on New York City, immigration, and job creation in the crisis, but took an ugly turn when Caruso-Cabrera accused AOC of voting against the COVID-19 relief stimulus all for her “celebrity status.”

” … She’s always trying to get her name in the headlines,” Cabrera-Caruso added. “She wants to be a celebrity, not a representative.”

And as the debate came to a close, things got uglier.

Caruso-Cabrera pointed out that Ocasio-Cortez’ mother even moved out of her district. Caruso-Cabrera said AOC’s mom fled from New York to Florida because of the steep taxes that AOC only wants to increase.

“You can come after me all you want. Leave my mom out of it. My mom is a widow,” AOC responded. “My mother is a school secretary who makes an hourly wage that’s laid off. You don’t know her. You don’t know what she’s been through.”

“Leave my mom out of it,” she demanded. “It’s really wrong.”

The Democratic primary election for the NY-14 district is scheduled to take place on June 23.

And if Caruso-Cabrera can pull the upset, Ocasio-Cortez could be MIA for good.

You can relive the virtual debate below: