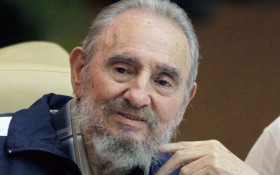 Cuban dictator Fidel Castro ranted and raved ahead of the US embassy opening in Havana, demanding that United States citizens pay millions in reparations to Cuba in payment for the American embargo.

Americans want to resolve billions of dollars in half-century-old American claims over property stolen after the Cuban revolution. Cuba has its own claims, as noted in a newspaper column by Fidel Castro on Thursday saying the U.S. owes the island “numerous millions of dollars” for damages caused by the embargo.

This same lunatic that once tried to aim nuclear missiles at United States cities is now trying to hold Americans to the fire by demanding a king’s ransom.

All this happened as Washington’s top diplomat, Secretary of State John Kerry, flew to Havana on Friday to raise the Stars and Stripes over the newly opened U.S. Embassy.

Cuban dissidents were notably not invited by the Obama administration to the embassy ceremony, who were avoiding tensions with Cuban officials that typically boycott events attended by the country’s small political opposition.

Giant Cuban flags hung from the balconies of nearby apartment buildings and people gathered at windows with a view of the embassy.

US officials and Raul Castro announced on Dec. 17 that they would re-establish diplomatic ties 54 years after the flag was taken down from the embassy overlooking Havana’s seaside boulevard, the Malecon.