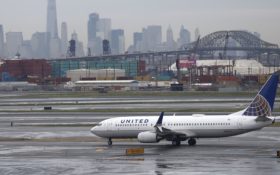 Airlines are bumping fewer passengers off oversold planes after taking to heart the public anger over a man being violently dragged from his seat earlier this year.

The U.S. Department of Transportation said Thursday that airlines bumped 2,745 passengers between July and September.

That is about one in every 67,000 passengers, and it is the lowest rate since the department started keeping track of bumping in 1995.

The rate has dropped steadily this year, especially since April when video surfaced of Chicago airport officers yanking a 69-year-old man off a United Express plane to make room for an airline employee.

United and other airlines responded by making changes, including raising the compensation paid to encourage passengers to voluntarily give up seats on oversold flights. But the number of volunteers who take cash or a travel voucher is also falling sharply — 74,358 in the July-through-September quarter, compared with 114,119 a year earlier.

Spirit Airlines was most likely to bump a passenger in the latest quarter, followed by Frontier and Southwest. Four airlines — Delta, Virgin America, JetBlue and United — bumped no more than one in every 250,000 passengers, according to government figures. Delta was the runaway leader in paying passengers to give up a seat — more than 32,000 in the quarter.

Meanwhile, for the second straight month hurricanes were blamed for more flight delays and cancellations than a year ago. Hurricanes Irma and Maria disrupted travel in Florida and the Caribbean.

The 12 airlines covered in the Transportation Department report completed 83.6 percent of flights on time in September, down from 85.5 percent a year earlier. A flight counts as on-time if it arrives within 14 minutes of the airline’s schedule.

Hawaiian Airlines, which benefits from many short flights around the island chain, held on to the top spot. JetBlue Airways had the worst record, with nearly 30 percent of its flights arriving late.

The same 12 carriers canceled 3.3 percent of their September flights, up from 0.3 percent in September 2016.