Fetterman blamed this for debate meltdown. Then, truth hits back - The Horn News 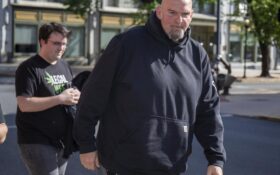 More than five months after experiencing a stroke, Pennsylvania Democrat John Fetterman struggled at times to explain his positions and often spoke haltingly throughout a highly anticipated debate against Republican Dr. Mehmet Oz as they vie for a critical Senate seat.

The forum had many of the trappings of a traditional debate, complete with heated exchanges and interruptions. But the impact of the stroke was apparent as Fetterman used closed-captioning posted above the moderator to help him process the words he heard.

Fetterman began the debate by acknowledging his stroke. He said, “I might miss some words during this debate, mush two words together, but it knocked me down and I’m going to keep coming back up.”

But then, Fetterman gave a disastrous performance. Afterward, his campaign blamed the awkward pauses not on the stroke, but on the errors in the closed captions.

“We are thrilled with John’s performance,” Fetterman communications director Joe Calvello told reporters. “He did remarkably well tonight – especially when you consider that he’s still recovering from a stroke and was working off of delayed captions filled with errors.”

“The closed captioning process functioned as expected during rehearsal and again during tonight’s debate,” Nexstar communications director Gary Weitman said in a statement. “We regret that Mr. Fetterman and his campaign feel otherwise.”

Nexstar said that Fetterman’s campaign had simply failed to rehearse.

The Nexstar staffer continued, “Both candidates agreed to the technical set-up for the closed captioning process weeks ago, which was implemented at the request of the Fetterman campaign. Both candidates were offered the opportunity for two full rehearsals with the same equipment used in tonight’s debate; Mr. Fetterman chose to do only one.”

Democrat strategist Paul Begala tweeted, “Debates are more often lost than won, and Mehmet Oz lost this one with his line that abortion should be a decision between ‘a woman, her doctor and local elected officials.'”

Fetterman accused Oz of obsessing over the stroke. “He’s never let me forget that,” Fetterman said.

In reality, Oz ignored Fetterman’s health challenges throughout the debate. Despite being a celebrity heart surgeon, Oz focused on his opponent’s policies on immigration and crime and his support for President Joe Biden.

Fetterman committed to supporting Biden’s likely re-election campaign 2024, but also called on Biden to While backing Biden, Fetterman also said, “do more about supporting and fighting about inflation.”

Statement from our parent company, @NXSTMediaGroup, in response to the @JohnFetterman campaign claiming he was “working off of delayed captions filled with errors” during last night’s Pennsylvania Senate debate on @NewsNation pic.twitter.com/PUT5ELfQ0C

Going forward, the biggest question is whether the debate will have a lasting impact with less than two weeks until the election and more than 600,000 ballots already cast. The stakes of the race to succeed retiring GOP Sen. Pat Toomey are huge: It represents Democrats’ best chance to flip a Senate seat this year — and could determine party control of the chamber and the future of Biden’s agenda.

The audience saw unmistakeable signs of recovery for Fetterman… but some experts expect him to be recovering well into the next Senate term.

“In my opinion, he did very well,” said Dr. Sonia Sheth, of Northwestern Medicine Marianjoy Rehabilitation Hospital in suburban Chicago, who watched the debate. “He had his stroke less than one year ago and will continue to recover over the next year. He had some errors in his responses, but overall he was able to formulate fluent, thoughtful answers.”

Oz, a longtime television personality, was clearly more at home on the debate stage. He committed to former President Donald Trump in the event of another Trump campaign.

“I’m a surgeon, I’m not a politician,” Oz said. “We take big problems, we focus on them, and we fix them. We do it by uniting, by coming together, not dividing.”

Despite serious health concerns, Fetterman refused to release his health records despite being asked repeatedly Tuesday by the moderator.

“My doctor believes that I’m fit to be serving,” Fetterman said. “And that’s what I believe is where I’m standing.”