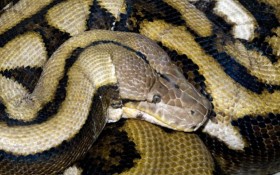 She’s no Holy Mother, but we’re still pretty impressed. A captive snake in southeast Missouri has become pregnant and given birth without any interaction with a member of the opposite sex, twice in two years.

The Missouri Department of Conservation’s Cape Girardeau Conservation Nature Center says it appears that a female yellow-bellied water snake reproduced on her own this summer, just as she did in 2014. The snake lives without a male companion.

This year’s offspring didn’t survive, but two born last summer are on display at the center.

Such virgin births occur in some species through a process called parthenogenesis. It doesn’t happen in mammals but occurs in some insects, fish, amphibians, birds and reptiles.

The conservation department says there have been no other known cases of parthenogenesis by yellow-bellied water snakes.