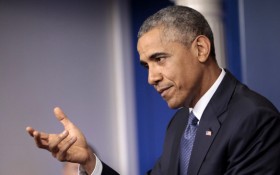 Looks like President Barack Obama has plans to flush another four million in taxpayer dollars down the drain, this time on ineffective, vaguely defined and expensive anti-terror recruitment programs.

According to critics, the taxpayer funded federal effort in Boston, Los Angeles and Minneapolis to combat extremist recruitment has been slow to start since it was announced a year and a half ago.

Few local programs have been directly created by the “Countering Violent Extremism” pilot initiative, with officials in those cities just starting to distribute more than $500,000 in Department of Justice grant money to jumpstart new local efforts.

And that’s not all. The Department of Justice started seeking applicants this month for some $3.5 million in grant money to develop, replicate or evaluate programs to reduce violent extremism.

Meanwhile, researchers at UCLA, Harvard and the University of Illinois at Chicago have a total of $1 million in Department of Homeland Security money to help enhance efforts to counter extremism in Boston and Los Angeles, specifically.

So far, though, little has been done. The furthest along appears to be Minneapolis, where officials point to at least one newly created but still not operational effort: a mentorship program working with youth in the city’s sizeable Somali community, which has produced extremist recruits over the years.

Six other organizations there also recently received $300,000 in federal and private money to develop programs addressing mental health, employment and parenting issues among the Somali community and other refugee populations.

Boston and Los Angeles, in contrast, appear to be months away from distributing their share of the money — if at all.

“It’s a little frustrating,” says Los Angeles Deputy Police Chief Michael Downing, whose department had been looking forward to federal support to enhance longstanding efforts that include outreach to help prevent radicalization. “We haven’t seen a dime. We’re clearly at the point where we want to put our money where our mouth is.”

Thom Mrozek, a spokesman for Eileen Decker, the U.S. attorney for central California, whose office is administering the Los Angeles grant money, said this week he couldn’t provide an update on when the money is to be distributed.

But he noted the funds — $216,000 each to Boston and Minneapolis and $100,000 to Los Angeles — were obligated in September 2015 and are good through this coming September, with limited extensions possible beyond then.

The effort in Boston, Los Angeles and Minneapolis was announced in September 2014 and spotlighted during a three-day summit on global extremism convened the following February by President Barack Obama.

But observers say it has been hobbled by a vague mission and poor leadership, despite the millions being allocated.

The Massachusetts Department of Health and Human Services, now leading the pilot effort there, is taking steps to distribute its $216,000 in federal money. But the soonest any local organization could expect to see the money under the current timeline is the fall.

Meanwhile, families trying to prevent loved ones from becoming radicalized must navigate challenges largely on their own, said Seamus Hughes, deputy director of George Washington University’s Program on Extremism.

“We’re stuck in this weird limbo,” he said. “There should be a way to address this that’s in keeping with civil rights and civil liberties concerns but also recognizes you have families struggling that are getting no support.”