Seattle's mayor to be arrested over unrest? - The Horn News 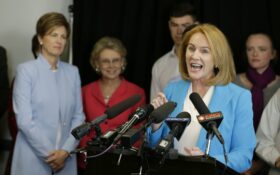 President Donald Trump warned Democratic leaders in cities torn apart by violent unrest that they must take action to restore “law and order.”

Now, one Democratic mayor could find out the hard way that inaction has consequences.

Seattle Mayor Jenny Durkin could be facing federal charges over negligence for letting the rioting, looting, and violence to continue unchallenged in her city, according to a New York Times report. Seattle was the site of the anti-police “autonomous zone,” where armed protesters declared multiple blocks of downtown Seattle under their control. Police were ordered to stand down and allow the occupation by protesters for days, despite reports of murders and rape.

Sources in the Department of Justice told The New York Times that Attorney General Bill Barr asked the department’s civil rights division to look into whether or not official charges could be filed against Durkin.

A spokesperson for the DOJ denied that Barr made the request.

So far, Barr has largely echoed Trump’s “law and order” rhetoric when it comes to cracking down on violent riots.

And he’s said the DOJ will flex its muscle if necessary.

“The power to execute and enforce the law is an executive function altogether. That means discretion is invested in the executive to determine when to exercise the prosecutorial power,” Barr said at a recent Constitution celebration in Washington D.C.

That could potentially mean big trouble for Durkin — but also for the vandals she allowed to run rampant in the city.

It’s being reported that Barr also instructed prosecutors to seek sedition charges on the worst of the rioters. In other words, that the agitators “conspired” to fight the U.S. government.

But for now, there haven’t been formal charges.

Soon, however, Durkin may soon be joining with the most violent protesters… behind bars.