FBI ordered to exonerate Hillary ‘at all costs’ - The Horn News 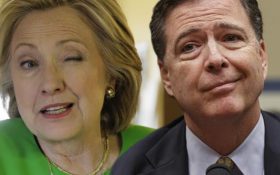 Opponents of Democratic presidential candidate Hillary Clinton were shocked when no charges were filed against her by the FBI following the investigation into her controversial homebrew email server.

Now, one conservative law expert thinks he knows why – the FBI was ordered to exonerate Clinton at all costs.

“Why the FBI would look the other way in the face of destruction of evidence and obstruction of justice is very telling,” Judge Andrew Napolitano said in an appearance on Fox News’ “America’s Newsroom” Monday.

“It tells me, and those of us that watch these things, that somewhere from above – the White House – they were told, ‘Exonerate her at all costs, no matter what you see, because she’s got to be available to run against Donald Trump,'” Judge Napolitano said.

Texas Rep. John Ratcliffe backed Judge Napolitano’s opinion during Wednesday’s questioning of FBI Director James Comey, insisting that the fix was in from the start and asserting that the decision not to prosecute was made even before Clinton was interviewed in early July — a claim Comey vigorously denied.

“You can call us wrong, but don’t call us weasels. We are not weasels. We are honest people, and we did this in that way,” Comey said under hours of questioning at a House Judiciary Committee hearing. “Whether you disagree or agree with the result, this was done the way you would want it to be done.”

Fellow Republican lawmakers are also unsatisfied. Conservative leaders grilled FBI Director James Comey on the FBI’s year-long investigation into the mishandling of classified email, which concluded in July when the FBI recommended against prosecution and the Justice Department closed the case. They demanded to know why multiple key witnesses had been granted some kind of immunity, questioned him on his interpretation of the key felony statute at issue and argued that the outcome revealed a double standard in the treatment of powerful public figures.

Committee chairman Bob Goodlatte of Virginia contended that Clinton had played “fast and loose with national security” and said it defied logic that she could escape prosecution. Texas Rep. Lamar Smith suggested that the FBI reopen the investigation in light of what he said were “several new developments.”

GOP panel members repeatedly pressed Comey on his acknowledgment that multiple witnesses had been granted some form of immunity. They also voiced concern with the number of people who had been in the room with Clinton during her July FBI interview.

Comey said he believed some form of immunity had been given to five witnesses, and that the actions were “fairly typical in a complex white-collar case, especially as you try and work your way up towards your subject.”

“So my overall reaction is, this looks like ordinary investigative process to me,” he added.

What is the overall reaction to Comey’s excuses by everyday Americans?

We’ll let their social media commentary speak for itself.

FBI director,Comey, continues to cover up for #Hillary ! If he's got an ounce of integrity left he would resign ! #MakeAmericaGreatAgain ???????? pic.twitter.com/lhwUwvoTtP

FBI Director Comey is, once again, making the case to rename the FBI the Federal Bureau of Incompetence.