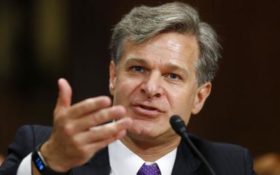 President Donald Trump’s nominee for FBI director, Christopher Wray, appeared before a Senate panel on Wednesday and made things clear: There will be no more political interference in the FBI.

Now that FBI Director James Comey is finally out of the way, perhaps it will finally mean failed Democratic presidential candidate Hillary Clinton will be jailed?

One can only hope.

Wray, 50, would inherit the nation’s top law enforcement agency at a particularly challenging time, given the controversy surrounding Comey and former Attorney General Loretta Lynch. The hearing, the first public window into Wray’s views since his selection, was largely devoid of fireworks in keeping with what friends and supporters have described as the nominee’s low-key and disciplined style.

He appeared to have bipartisan support from senators.

The back-and-forth with lawmakers on Wednesday focused on the Russia investigation, with Wray repeatedly voicing his respect for Special Counsel Robert Mueller and his work.

Wray, who most recently has enjoyed a lucrative legal career at an international law firm, also faced questions about his work as a top Justice Department official in the Bush administration. He served the government at a time when advanced interrogation techniques were approved within the Justice Department for terror suspects captured overseas.

Although Trump as a candidate professed support for waterboarding, Wray said he considered torture to be wrong and ineffective. “The FBI is going to play no part in the use of any techniques of that sort,” he said.

Those who know him say that unlike the outspoken Comey, Wray would be a more reserved leader. His mild-mannered style could bode well for the agency at a time when its work has been thrust into the center of a political maelstrom.

He has deep experience in Washington, having served as head of the Justice Department’s criminal division in the Bush administration, a position that had him overseeing major criminal prosecutions — such as the special task force investigating the Enron collapse — and also developing the U.S. government’s legal response to terrorism and national security threats.

Over the past decade, he has worked in private practice at King & Spalding in Atlanta, where he’s defended large corporations and financial institutions in criminal and civil cases.

He provided legal services to Johnson & Johnson, Wells Fargo, Credit Suisse and fantasy sports providers DraftKings and FanDuel, among other big-name clients, according to ethics documents released Monday. If confirmed, he’ll have to step aside for a year from matters involving those clients and the law firm. He also assisted New Jersey Gov. Chris Christie during the so-called Bridgegate scandal.