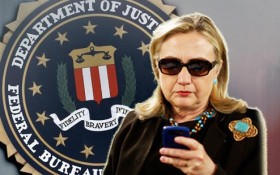 Could this finally be the beginning of the end for former Secretary of State Hillary Clinton?

And sources told the Post that the probe is nearing its end.

Clinton has long faced criticism for using a private, home-brew email system during her tenure as secretary of state. While Clinton has repeatedly denied handling classified information through her private email, several emails had to be held back from public release because information contained in them was deemed classified or too sensitive.

With the FBI reportedly convinced that Clinton mishandled classified information, it’s next task is to convince the U.S. Department of Justice to indict Clinton and prosecute. While that was once considered an unenviable — if not impossible — task, there could be enough political pressure to force the DOJ’s hands, according to former U.S. ambassador John Bolton.

“I think that the pressure is definitely building,” Bolton said Sunday.

Bolton, speaking to radio host Aaron Klein, went on to say that “there’s a real risk for Obama and for the attorney general that the FBI will explode” if an indictment doesn’t occur.

“It may not be the same thing as firing Archibald Cox [the discharged Special Prosecutor] in the Watergate investigation, but if this potential prosecution is tanked for political reasons, it will be a very loud explosion.  And it will stain Obama’s legacy forever. It will damage [Attorney General] Loretta Lynch’s professional reputation and I think it will have a profound impact on the presidential election, as well,” Bolton said.

Clinton currently enjoys a lead of more than 300 delegates over Vermont Sen. Bernie Sanders in the Democratic presidential primary, but Sanders supporters remain hopeful an indictment would help them rally for a historic comeback. With Washington state, Alaska and Hawaii set to hold votes on Saturday and thousands of delegates still at stake, an indictment could ultimately cost Clinton the White House she’s long coveted.