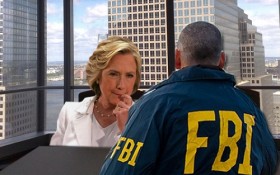 It’s been months in the making — but it looks like it’s finally happening soon.

Thursday, multiple sources in the FBI revealed they have been interrogating top aides of former Secretary of State Hillary Clinton in her growing email scandal.

And those sources confirmed that the FBI is set to haul Clinton in for questioning in the coming weeks, right as the 2016 general election campaigning process ramps up.

With a former Clinton IT specialist and a notorious Romanian hacker reportedly cooperating with the FBI, it may finally be time for Clinton to panic.

“One of the final and most anticipated steps in the probe is an interview of the former secretary of state,” CNN reported. “The fact that Clinton is a presidential candidate active on the campaign trail presents some logistical challenges for the FBI, which has been quietly bringing witnesses into an FBI office without drawing attention.”

The FBI has interviewed Huma Abedin, a close aide to Clinton, regarding Clinton’s private email server setup, a person familiar with the probe said Thursday.

The FBI and Justice Department have been investigating whether sensitive information that flowed through Clinton’s email server was mishandled.

Abedin was one of Clinton’s closest aides during her tenure as the nation’s top diplomat, serving as deputy chief of staff. According to reports, other Clinton aides have also been interviewed — and Clinton herself is set to be questioned soon.

It is not known how much longer the investigation will take, but inside sources say the Clinton interrogation will come within weeks, CNN reported Thursday. FBI Director James Comey has said there is no timetable for finishing the probe and it’s being done thoroughly.

On Wednesday, a federal judge in Washington also said he may order Clinton, the Democratic presidential front-runner, to testify under oath about whether she used a private email server to evade public records disclosures.

The order from U.S. District Judge Emmet Sullivan granted a request from the conservative legal advocacy group Judicial Watch to question six current and former State Department staffers, including Abedin, about the creation and purpose of the email system. Those interviews would be part of a civil case from Judicial Watch about whether the State Department conducted an adequate search of public records in response to a Freedom of Information Act request.