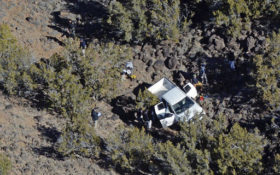 Federal investigators in New Mexico are trying to piece together the final moments of two sisters and their children who were found dead on tribal land just days after authorities issued an alert that they were missing and might be in danger.

The FBI on Wednesday was waiting for preliminary autopsy reports on the five bodies found in a remote area on the western edge of Santa Ana Pueblo.

Relatives have identified the bodies as sisters Vanessa and Leticia George and their three young daughters, FBI spokesman Frank Fisher said. While authorities are unsure about the cause of death, he said foul play by another party isn’t suspect.

When asked whether the women and children could have died from exposure, Fisher declined to provide any details. “That’s part of the investigation that’s still going on. We want to see autopsy reports,” he said.

The case began to unfold when family members asked police to check on the two women and their children last week. Police arrived at the home they were renting in Albuquerque to find no one there. Cellphones and other belongings were left behind, prompting police to issue a flier about the women’s disappearance.

The women were last seen Thursday on the Santa Ana Pueblo. That night, a storm rolled into the area, bringing snow, howling winds and frigid temperatures.

Their white truck was found on pueblo land, at the end of a double-track dirt road near an outcropping of rocks. It was damaged on the front left side and it appeared as if the air bags had deployed.

The body of Leticia George, 20, was discovered Sunday in the same area as the truck. The bodies of two children were found nearby the next day. On Tuesday the remaining two bodies were discovered.

Relatives have set up an online fundraising page to help with funeral and other expenses. The posting says the family is “going through an unbearable loss.”

The discovery of the bodies on Santa Ana Pueblo land has been unsettling for the tribal community, pueblo officials said in a statement issued Wednesday. They called it a terrible tragedy and offered their condolences to family members. But they noted that none of the victims were tribal members or affiliated with the pueblo.

The pueblo had no information as to how or why the women found their way onto Santa Ana land.

Police had originally questioned the father of Vanessa George’s children, Murphy Becenti, who reported seeing the women and children on the pueblo last Thursday.

Court records show George and Becenti recently had a fight that resulted in police being called. Becenti was arrested and released the next day.