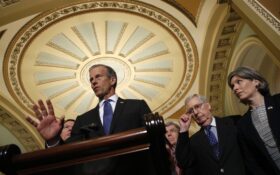 Harold Thune, a World War II veteran, educator, and lifelong South Dakota resident, died Saturday, on the 75th anniversary of the Allied victory over Japan, commonly known as VJ Day, according to the senator.

The elder Thune grew up in Murdo, where his family worked in a hardware store business. He played basketball at the University of Minnesota and earned most valuable player honors in 1942 the year he graduated and joined the Navy.

“One of the greatest treasures my dad gave me was the appreciation for being part of a team, no matter what station in life I’ve found myself – in sports, in politics, in governing, and, most importantly, in being part of a family.” Sen. Thune said in a statement. “He’d always talk about making the pass, finding your teammate, making the team better.”

Thune and his wife Pat, who died in 2012, had five children, including the senator.